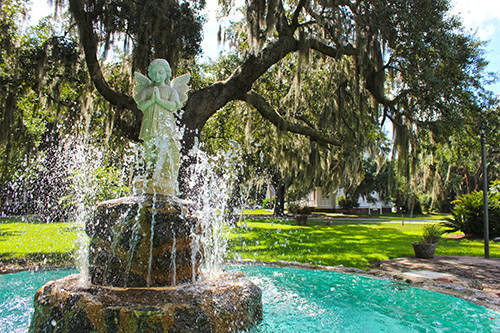 You have discovered Georgia’s second oldest city, founded in 1736. 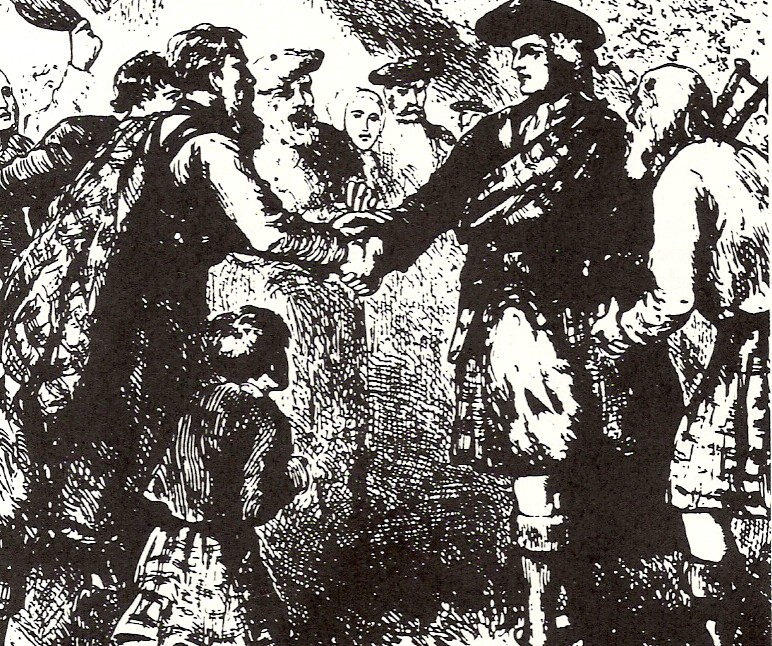 Highlanders Settle Darien General James Edward Oglethorpe founded the new Georgia colony at Savannah on February 12, 1733. He soon realized the need for military outposts to the south to protect the main settlement at Savannah. The purpose of the Georgia colony was largely military at first (as well as philanthropic). Thus, Oglethorpe decided upon an outpost on the former site of Fort King George on the Altamaha and a more elaborate fortification on St. Simons Island, a short distance south of the Altamaha. In October 1735, a band of Highland Scots, recruited from the vicinity of Inverness, Scotland, by Hugh Mackay and George Dunbar, sailed from Inverness on the Prince of Wales. In early January 1736, they arrived at Savannah and, on Oglethorpe’s orders, began making plans for settling at the mouth of the Altamaha. On the 19th of January, after traveling down the inland waterway by boat, the Highlanders landed at Barnwell’s Bluff on the site of Fort King George. There the Scots established the settlement they called Darien, in memory of the ill-fated expedition made by their countrymen to the Isthmus of Darien in Panama in 1697. There were 177 people in this hardy band of Scots, including women and children, and they were led by John McIntosh Mohr and Hugh Mackay. The men were trained Highland warriors, among the world’s finest fighting soldiers and specially selected by Oglethorpe for the purpose he had in mind. The Highlanders emplaced cannon on the earthworks of Fort King George; huts were built for the soldiers and those who had brought their families. A small kirk was built for the purpose of holding divine services. The Scots had brought their own minister, Rev. John McLeod of the Isle of Skye, recently ordained by the Presbyterian congregation in Georgia. Captain Dunbar wrote to the Georgia Trustees: “The Scots have settled at Barnwell’s Bluff on the Altamaha and desire their town shall be called Darien. On February 22, 1736, Oglethorpe made his first visit to Darien. The occasion marked the first military parade of British troops to be held in Georgia. In their honor, Oglethorpe wore the Highland habit. As they marched in review before him, the Highlanders made an impressive sight in full regalia, with claymore, side arms and targes (shields). In the summer of 1736, Oglethorpe again visited and on this occasion he laid out the town of Darien on a high bluff overlooking the river about one mile west of the Barnwell Bluff outpost. Here, Fort Darien was to be built; a town was surveyed and town squares laid out with commons on the east and north and acreage lots to the west of Fort King George. Late in 1739, the District of Darien was laid out, comprising an area approximating that of present-day McIntosh County. For a time, the town of Darien was called New Inverness to distinguish it from the District.

Darien as a Great Port 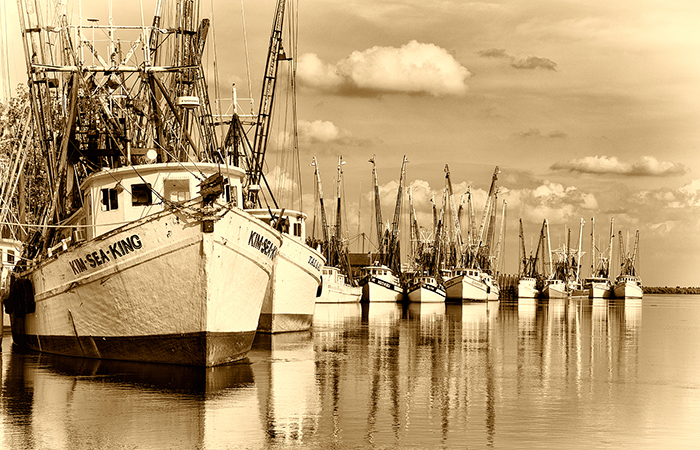 Darien as a Great Port In 1816, Darien was incorporated, and the seat of county government was moved there from Sapelo Bridge two years later. A local newspaper, the Darien Gazette, was established, and, early in 1819, the Bank of Darien opened for business. The bank began with a capital stock of 1 million. Half owned by the State of Georgia, the bank’s first Board of Directors included some of McIntosh County’s most prominent citizens: Thomas Spalding, John McIntosh, Scott Cray, James Troup and James Dunwody. Representing the stockholders on the Board were Calvin Baker, Barrington King, John Kell, Henry Harford and Jonathan Sawyer. Spalding served as the bank’s first president, from 1819 to 1826, after which Anson Kimberly, then James Troup, served a president. Ebenezer S. Rees was cashier. The deposits of Federal funds in the Bank of Darien in the 1820s reached huge proportions, later peaking at 1.6 million in 1836, when Darien was at the height of its commercial prosperity. The bank had branches in the Georgia cities of Savannah, Augusta, Milledgeville, Macon, Marion and the gold mining towns of Auraria and Dahlonega. The bank was a major backer of the gold fields of North Carolina and north Georgia in the late 1820s and early 1830s.

Cotton, Rice and Lumber Industries in the Nineteenth Century 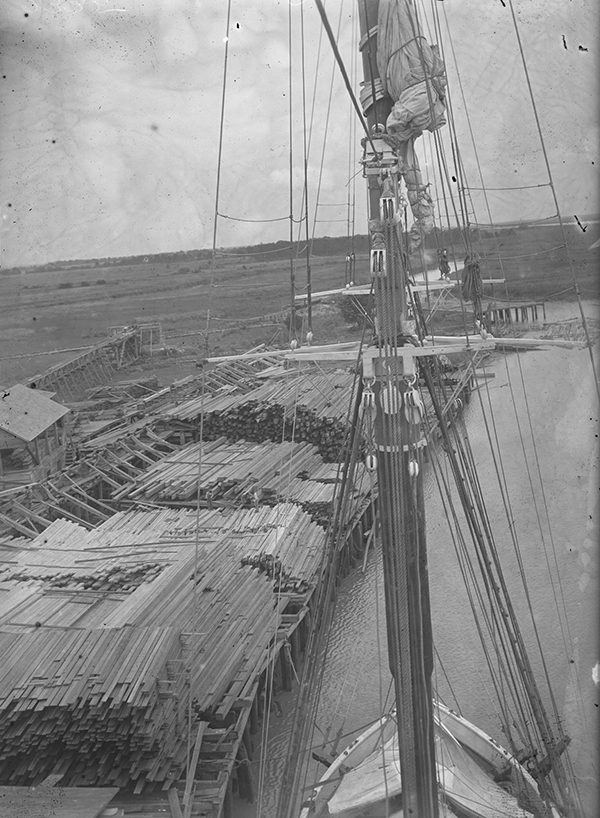 During the first few years of the 1830s, Darien reached its peak of commercial greatness. Exports of baled cotton from Darien were exceeded only by the ports of Charleston and Savannah. Darien’s waterfront was fully developed at this time, and ships crowded the Darien River and Doboy Sound awaiting cargoes of cotton, rice and lumber. Pine timber, rafted down the Altamaha to Darien from the interior, made the town the leading center of export for lumber on the southern Atlantic coast during the late Nineteenth Century. Darien became an international port as ships from Europe, Asia, and South America frequented the local waterways to load lumber. The peak was reached in 1900, when more than 100 million linear board feet of timber and lumber were shipped from Darien. Shipment totals dramatically declined later, as the supply of timber from upriver, once thought inexhaustible, was reduced to a trickle due to overcutting. The downfall of Darien as a great port followed the development of railroads in Georgia, all of which bypassed Darien. 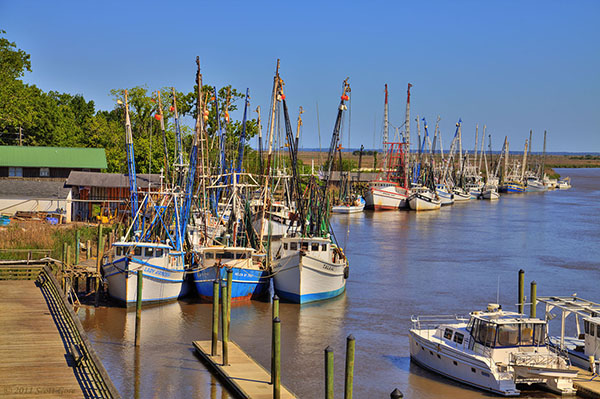 From 1880 to 1910, McIntosh County oyster harvests were among the highest in the world, rivaling even the Chesapeake Bay, with a record harvest of 8 million pounds in 1908. The oyster industry went into a long decline after the early 1900s, with only 38,000 pounds harvested in 1978, a decline blamed on overharvesting. As the oysterbeds declined, a new commercial fishery developed: shrimping. By the early 1960s, Darien and McIntosh County had the largest shrimping fleet on the Georgia coast, with several shrimp and oyster packing houses in town along the banks of the Altamaha. Supply and demand of shrimp and increasing costs such as diesel fuel and loans on bigger, more modern boats have resulted in economic uncertainty in recent years. Today, Georgia’s shrimpers struggle to survive against competition from cheaper, imported shrimp. However, Wild Georgia Shrimp is proudly served in local Darien restaurants and seafood connoisseurs can readily appreciate the difference in flavor and freshness. Fishermen in McIntosh County also harvest blue crabs and whelks, with the advantage that blue crabs can be harvested in Georgia and shipped to northern restaurants before northern crab fisheries are opened. 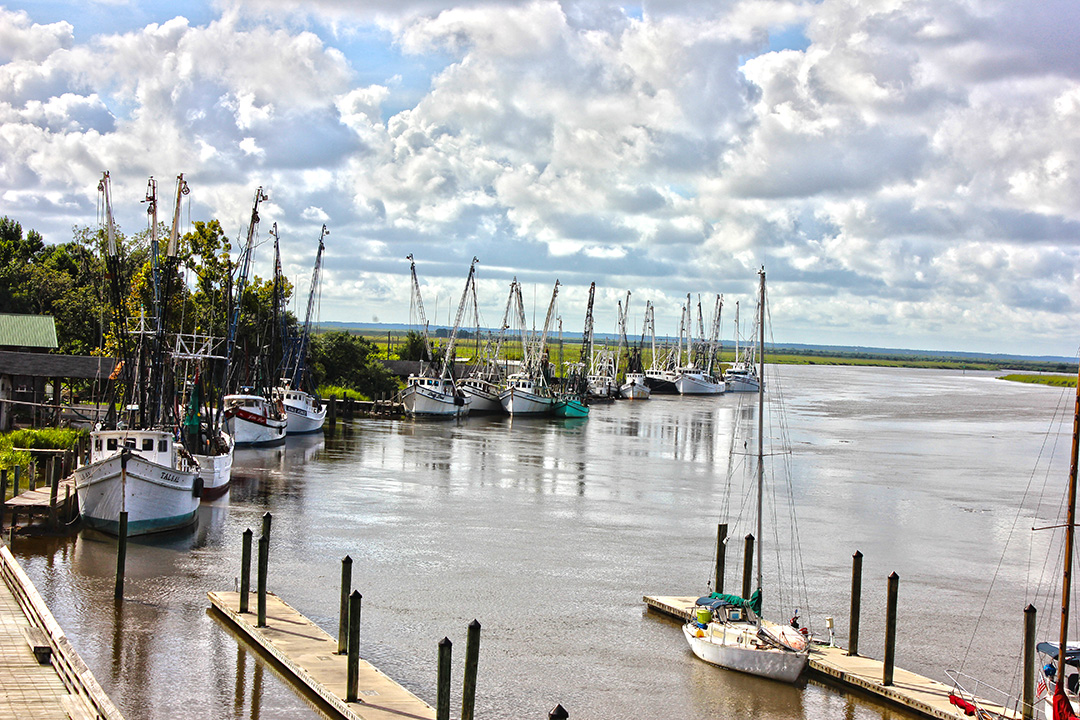 Darien has been at center stage for its economic importance several times during the past two centuries. Now, Darien is fast becoming an exciting tourist destination among the Golden Isles of Georgia, partly due to its central position, but also due to its wealth of historic sites and its picturesque, refurbished waterfront. The City is currently in the process of further developing the waterfront so tourists can board and tour a commercial shrimping vessel, in addition to enjoying the sights, sounds, and activities along the Darien, Butler and Altamaha Rivers. Darien is conveniently located between the cities of Savannah, Georgia, and Jacksonville, Florida, and just one mile east of Interstate 95. Visitors traversing I-95 from Maine to Florida can easily visit Darien and still keep their travel schedules on track. Depending on the time available, they’ll enjoy great hospitality and fresh seafood, historic buildings, scenic beauty and a wealth of activities.